Let’s take, for example, two characters are drawn in the foreground and the background is left completely bare. After this done the audience has no idea what the artist is trying to convey. But once you add a background a complete image is formed. If you draw a bustling city, it will tell one side of a story and if you draw a campsite it will tell another side of a story. Either way, the background will include details that will also contribute to the concept.

A strongly sketched background needs to connect the foreground and be able to tell a story to the viewer, by creating a natural rhythm that the viewer’s eye can follow when they glance at the image and at the same time keep their interest at peak levels.

There are also certain rules that a design artist must follow when creating sketch background, some of them are as follows:

The way objects tend to overlap other objects in pictures really determine the perception of the picture. If the objects are partially overlapping or obscuring an element of the image it will make it seem closer to the viewer. 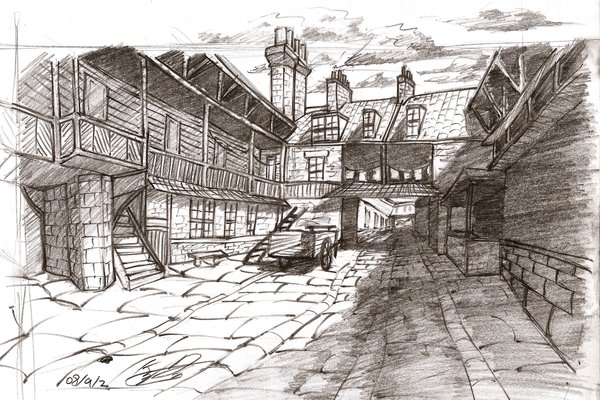 There is a phenomenon that occurs in nature known as the atmospheric perspective. Wherein, dark objects usually appear closer and light objects appear further away. This is the reason Mountains that far appear hazy and brighter and mountains that are closer to your perspective appear darker and more contrast.

The most important element in sketch background drawings is that you will need to determine the concept of the entire image and the way it will connect to your foreground and the way it should tell a story. A strong foreground cannot save a weak background, so always make sure that all the components of your drawing have a strong connection to each other and to the viewer.